As a casual reader I loved this book. As a writer I have mixed emotions. 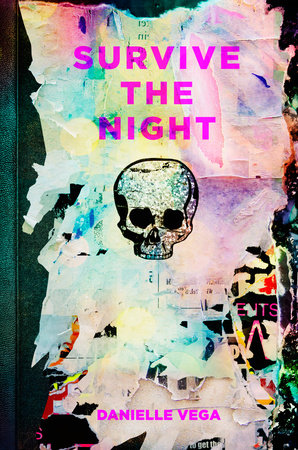 If you’re looking for a story filled with drama, drugs, and teenage terror written in the style of Christopher Pike, you’re going to LOVE Survive the Night.

NOTE:This post contains an Amazon associate link in case you would like to purchase the book. I receive no compensation for reviewing these books. They aren’t given to me for review. Unless otherwise stated, I’ve purchased them of my own free will because I wanted to read them.

I know that’s exactly what I was looking for when I picked it up at Barnes and Noble a few days ago. And, for the most part I wasn’t let down.

When seventeen year old Casey, who’s fresh out of rehab for abusing pain killers, attends an underground rave in the abandoned subway tunnels of New York, she quickly learns that life’s not all fun and games, even after you’re sober. Friendships are tested, lies are brought into the light and Casey and her group of friends learn there’s just as much to fear under the dangerous streets of New York as there is above. A night of drinking and dancing quickly turns deadly for the group of misfits when they stop dancing and start running for their lives as they try to survive the night.

The cover of this book caught my eye and drew me in instantly. It’s really one of the simplest, yet most interesting covers that I’ve seen recently. I especially love the fact that it’s hardcover and it’s not covered by a dust jacket. The gorgeous artwork is directly on the cover, complete with a glittery skull.

It’s chock full of curse words, drugs, drinking and bloody good gore. All of the things that I loved about Christopher Pike books when I was a teenager, before I knew there was much more to a story. I have mad respect for any author who writes a young adult book and doesn’t water it down. I have even more respect for them when they tackle serious topics that today’s youth (and adults) face, such as drugs, sex, choosing the right friends to hangout with, and forcing characters to own up to their own shitty choices.

Don’t get me wrong, I’m not saying that swearing, screwing and partying it up are what makes a good YA book, because it’s not. I just happen to enjoy those things in my books when they’re tackled in the proper manner. Just because you’re writing for a younger crowd doesn’t mean that these things don’t happen. They do. Think back to when you were a teen, were you a saint? I actually was pretty damn close, but I still cursed and watched movies with sex and violence in them while attending church faithfully every week. I turned out just dandy. All I’m saying is that I can’t stand when YA writer’s try to dumb down their style or whatever simply because they’re writing for the under eighteen crowd. If it’s a story about teens fifteen and older and you feel the need to have your MC drop the F- bomb then by all means go for it.

This book does all of that. And all in all it was a fun, creepy, gory ride that I plowed through. It was not only a book that I didn’t want to put down, it was also a book that I kept thinking about after I’d put it down.

My only complaints are that it could use another once over with a fine tooth comb. There were a few grammatical errors and other things that a casual reader might not pay any attention to.

In one sentence, Danielle Vega describes a male character as wearing a thin T-shirt, but in the next paragraph she states that he’s wearing a hoodie. The rest of the book never mentions him wearing the hoodie again and there’s no mention of him ever removing said hoodie. As a character snob this really bothered me. Know you’re fucking characters and what they look like in every scene. Pfft!

Another thing that I found frustrating was that she tended to use certain phrases in repeat. It got old. There are more ways to describe things than using the same phrase in every chapter, sometimes multiple times – “As if it were a living thing” – How was it like a living thing? What made Casey think that? STOP SAYING IT OVER AND OVER!!

I also found the deaths to be kinda predictable. And I didn’t find myself really FEELING for any of the characters, not in the way I would have hoped.

Despite these nit picky writerly issues, it was still a good book, it just needs a little more tightening. Overall I’m happy that I purchased and read the book. I don’t feel cheated in the least and I look forward to reading her other novels.

So, if you’re looking for a quick, creepy YA horror story don’t hesitate to give this a go. Snag your copy of Survive the Night and let’s discuss it! Already read it? Be sure to leave a comment letting me what you thought of it! Do you think certain topics shouldn’t be touched on in YA books? Do you think that YA novels with sex, drugs and cursing send teens the wrong message?

The Gallery of Magick

tell your stories ~ love your life

All Things Writing and Geek, in one neat little blog!

why can we (Palestine/ African American) fight together, but can't love together

Story picks from wattpad and more....

I write because I must

The Art and Craft of Blogging